We have arrived in Cape May, on the southern tip of New Jersey!  This will be our jumping off point for the commencement of our trip along the Jersey coast starting tomorrow.  The New Jersey ICW has continuous shoaling challenges with depths of only 3′ in some areas making it prohibitive for many boats to use it.  So a boat with any keel at all must cruise on “the outside”, that is, in the Atlantic Ocean.

When cruising in economy mode, this 120 +/- mile trip is one l-o-n-g (10-11 hours) day.  A few times we’ve done it at night.  But the last couple of years we’ve broken up into two days, stopping in Atlantic City.  It makes it so much more enjoyable, especially with two dogs on board. 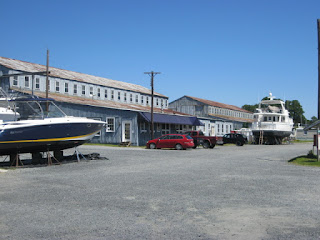 Prior to reaching Cape May, we took a few days “off the water”, and had some work done on the boat at one of our favorite yards, Washburns in Solomons, Maryland.  Those of us who have been there numerous times don’t really give it much thought, but the site of the yard was the nation’s first naval amphibious training base, training some 68,000 sailors, marines, and coast guardsmen and soldiers between 1942 and 1945. Seventy years later the buildings remain and are still actively used by the yard personnel. 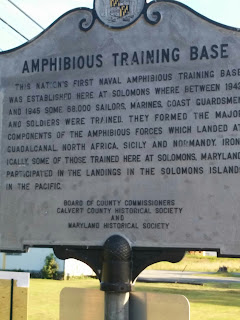 No sooner were we were tied up at a dock positioned right on the Canal, a  RORO vessel rolled past!  A RORO (“roll on, roll off”) is designed to transport wheeled cargo, such as automobiles, trucks, and railroad cars that are driven on and off the ship on their own wheels or using a platform vehicle.  If you have ever seen one of these ships in open water, you know how big they are.  But when one is in a narrow Canal and right in front of you, they are positively massive. 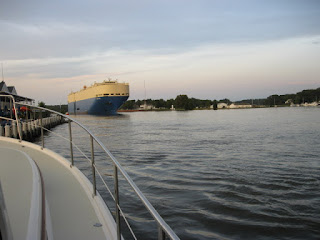 And then, we witnessed the pilot exchange!   I provided the pictures, but I give Wikipedia the credit for explaining how it works:

“Today’s canal is a modern sea-level, electronically controlled commercial waterway, carrying 40 percent of all ship traffic in and out of the Port of Baltimore.

Since 1933 the Corps’ Philadelphia District has managed canal and highway bridge operations from a two-story white frame building on the canal’s southern bank at Chesapeake City, Maryland. Cargo ships of all sizes, tankers, container-carrying vessels, barges accompanied by tugboats, and countless recreational boats create a steady flow of traffic. Through state-of-the-art fiber optic and microwave links, dispatchers use closed-circuit television and radio systems to monitor and safely move commercial traffic through the waterway.

Navigating oceangoing vessels requires extensive maritime skills, with strong currents or bad weather conditions adding to the risks. A United States Coast Guard certified pilot is required for vessels engaged in foreign trade transiting the canal, the Delaware River and Bay, and Chesapeake Bay. Many shipping firms use pilots from the Delaware River and Bay or Maryland pilots’ associations.

Typically a Delaware River and Bay pilot boards a ship as it passes Lewes, Delaware, entering the Delaware Bay, and guides the vessel up the bay and into the canal to Chesapeake City. A Maryland pilot then takes over and continues the ship’s transit into the Chesapeake Bay to Baltimore or Annapolis, Maryland. The procedure is reversed for eastbound ships. At Chesapeake City a “changing of the pilots” takes place, while the pilot launch maneuvers alongside a vessel as it continues its journey without stopping. The pilots use the ship’s gangway, Jacob’s ladder, or port entrance to climb aboard or leave the vessel.”

I apologize for the fuzzy photo.  It’s hard to photograph a moving object!   But it was thrilling to witness.
We’re on to NYC next!