We cast off our lines from Essex Island Marina at exactly 9 am to hit the current/tides just right.  Down the Connecticut River and out in to the (Long Island) Sound.  It was still breezy but out of the east, 5-10 with 1 footers, and chilly so we stayed in our cosy pilothouse.  The captain of this boat is amazing.  He knows exactly when and what, in order to make the ride the most comfortable for his crew!  And every captain knows how important it is to keep the crew happy!

Bound again for Port Washington on the north shore of Long Island, we picked up our mooring there around 5.  With the dinghy all cleaned up for the Newport show, and Baltimore TrawlerFest coming up, we didn’t want to mess it up again, so we called the launch to take first mate and pups ashore for a long walk. (But having provisioned in Essex, it killed me not to need to go to that fantastic grocery store there!)

The next morning A&R (that we met at the Newport boat show) flew down from Boston for a sea-trial.  It was a nice opportunity to get to know them better, and we appreciated the effort they made to meet up with us.  They were impressed with the boat and the ride, and why not?  What’s not to like?

Upon their departure a few hours later, we left Port Washington for a short ride to World’s Fair Marina.  I wrote something in our 2010 blog about this marina which is right next to Laguardia Airport.  We also stayed there last year during Hurricane Irene.  It’s a very protected spot, with floating docks, and high pilings.  Plus it’s easy to get into the City from there (#7 train takes 45 minutes).  The docks and power are not in the best shape, but the staff is amazing, and are even getting to know us (the dockhand commented that we had a different color boat this year!)  Joy came out from the City that afternoon, and we walked to a fabulous – and authentic! – Mexican restaurant for a late lunch.  John had seen it featured on Guy Fieri’s tv show, “Diners, Drive-ins and Dives”.

Joy left at 11 the next morning so that she could get back into the City for her 1:00 tennis practice.  She plays on a couple of teams and they practice at several different locations around the City and it’s boroughs.  That day she was to practice at some courts on the East River.  What a coincidence!  We would be going right by them during her practice time.  We made an arrangement with her to toot our horn as we passed.  She told us the courts were under the Williamsburg Bridge and that it could be noisy, but John reassured her that she would hear the horns! 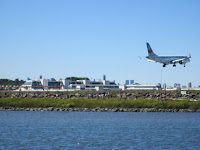 As we left the marina, the planes were flying right over us.  And I mean, right over us!  Meantime, we were against the current as we headed down the East River, sometimes as much as 5 knots!!  So much for that nice push we had going up the River a few weeks ago.  These pictures below don’t really capture the turbulent water at Hell’s Gate, but I do believe you get the idea of the force of the current passing by these buoys which are just off the East River Drive. 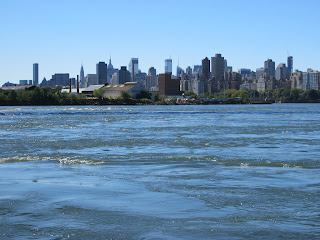 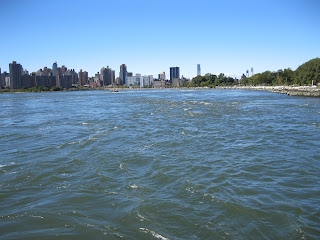 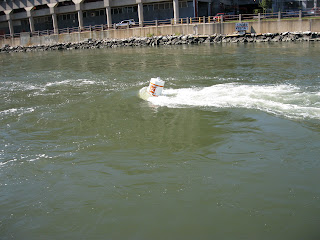 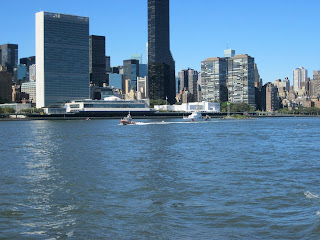 The Coast Guard was broadcasting a “security zone” outside the United Nations as it prepares for the UN General Assembly (when 120 world leaders and their entourages gather) this week.Between them and the NYPD, they were all doing a good job of keeping pleasure craft away.

Approaching the Williamsburg Bridge we got our binoculars out and searched for tennis courts.  We were probably 100 feet offshore when we spotted them.  John tooted the horn a couple of times.  Suddenly we saw a couple of tennis racquets waving through the air!!  Another toot!!  Mission accomplished, thanks to the Kahlenberg airhorns!!  I have to say, it was pretty cool to be passing by on the boat and waving to her onshore.  And in her phone call to us later in the day, she said she and her friends thought it was pretty cool too!  (It’s always nice when your kids think stuff you do is “cool”!) 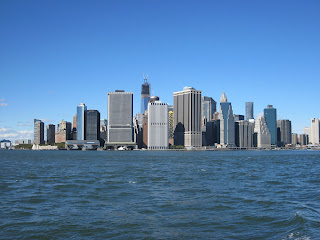 Leaving Manhattan (and the new Freedom Tower) behind us, we ended the day at a small yacht club marina in Great Kills on Staten Island.