We have completed our fall 2012 boat show season, and are happy to report that it was a safe, harmonious, and productive one!  We were spared any nor’easters while aboard “JOY”, and made it through T/S Sandy during the Ft. Lauderdale show.

I left off on the blog at the end of September, having just completed the run from Cape May to Baltimore.  By the way, if your travels ever find you in that neighborhood, be sure to stop.  There are lots of great marinas in Baltimore Harbor, with most accessible to restaurants, grocery stores, and the waterfront scene.  There’s a wonderful walking/running path along the harbor which is nice way to stretch your legs and get some exercise.  (Always check www.activecaptain.com for more information about marinas.  We can’t say enough about that site.  It’s our cruising Bible!)

John and I got the boat set up in our slip for TrawlerFest and Bob arrived the next day.  The dogs and I drove to Hilton Head for a few days of land/home time.  I do love being on the boat, but home time is always appreciated!  Upon my return to Maryland, John and I took the boat to the dock of some dear friends, Cathie and Pete Trogden.  They own Weems and Plath, the nautical instruments company headquartered in Eastport.  (Thanks for having us!) Being with friends along the way  makes boating such fun.

Then it was on the Annapolis boat show. Like the Newport show, most of the docks are temporary, put into place as the boats come in.  But unlike the Newport show, the ABS requires that all boats depart on Sunday night following the show.  We’ve never understood that, making it mandatory for the boats to depart into the darkness of the Chesapeake; but we don’t have much choice.  It is what it is!  So Bob and John drove the boat to Solomons Maryland where she would stay temporarily.  I met them in the car.  In the morning we unloaded everything we would need for our next gig, Ft. Lauderdale, (and then some) into our van and headed out.

Fast forward 3 days (with a quick stop at home) and we were “on the road again” to Lauderdale.  As I mentioned earlier, T/S Sandy descended on us bringing huge winds and rain.  As a result the crowds at the show the first two days were down which was disappointing, but the storm moved on and the sun returned, as did the show attendees. 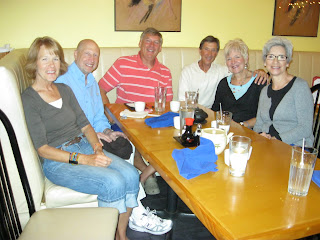 We are now in recovery mode, having completed 4 shows in 6 weeks covering nearly 3000 miles in both boat and car.  We have also completed the orientation for our newest owners whose boat, “EASY WATER” from Fairbanks, Alaska, was featured in the Ft. Lauderdale show.  Last night we had dinner with them along with other members of our Krogen Express family, Jill and Robert (you remember them, from our ads!!) 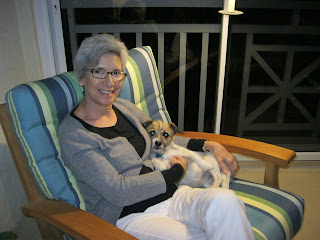 Our dogs love Robert and Jill (fortunately the feeling is mutual), so M.E. wasn’t shy about cosying up to Jill on our porch after dinner! 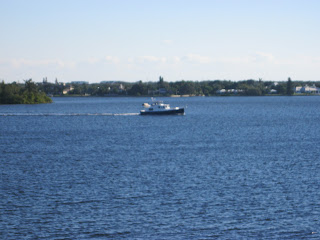 Here’s a picture of “EASY WATER” the next morning, passing by our place on the Indian River in Vero Beach.  (I just have one of those “sure shot” cameras (in this case it wasn’t such a sure shot) so I apologize for the blurry pics. But you get the idea!)  They were honking their horn and everyone was waving!  Great fun.  It gives us such pleasure to have these types of experiences! 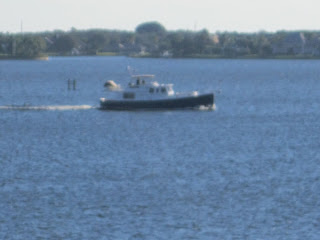