We last left you in Cape May, and for us that seems like ages!  The main reason we don’t update more is the internet; and quite frankly, I just get lazy!! What a blessing and a curse the internet is! We love it and depend on it; yet while cruising we don’t often have it, or it’s variable and spotty.  And when we do have it, it’s often at a location where we’ve had a long day on the water, get settled in for the night (either anchoring, at a mooring, or a dock), eat dinner, watch a little tv or read, and go to bed!  So writing up an entry for the blog gets put on the back burner. But today I feel that we owe our readers an updated entry.  So here it goes………..

The Jersey coast proved to be a fine cruise.  The water was great….from a light chop to almost smooth.  Now that’s the kind of day I like to have while cruising in the Atlantic Ocean!  And was it ever a clear day!  We could see the skyline of New York City from the farthest distance we’d ever experienced…….over 10 miles south of Sandy Hook, New Jersey.  It was incredible!  Even though we have cruised through New York more than two dozen times, it is still an amazing experience. 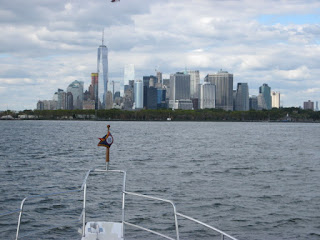 After a long day we settled for the night at one of our regular stops, a marina just northeast of the City near LaGuardia Airport.  The marinas in the NYC are few and far between, so we appreciate having this one which is convenient to the airport, Citi Field (where the Mets play), the Tennis Center for the US Open, and the subway for going into NYC.  In fact, it was our hideaway during hurricane/tropical storm Irene during 2011.

The next day we moved on to Port Washington on Long Island. This is one of our favorite spots to hang out.  The town provides complimentary moorings to visitors, AND there is a huge grocery store there.   So, stock up we
did! Our daughter, Joy, came out from the City for the weekend, and we had a delightful time.

On a mooring or while at anchor, we are dependent upon our tender (or dinghy) for transportation to land.  And that is critical when you have two dogs on board!  But they do quite well with it. M.E. is an experienced dinghy rider.  Zoey is getting better.  At first she didn’t know quite what to make of it. It takes us about 5 minutes (literally) to put it in the water, and off we go.  Our weekend in Port Washington was unusually hot for this time of year, so John and I enjoyed a swim off the boat on Sunday afternoon.  Joy headed back in to the City that evening.

Long Island Sound’s surface water area is 1300 square miles.  It is 21 miles wide at it’s widest point, and 113 miles long.  Depths vary greatly in the Sound, averaging 63 feet deep with a maximum depth of 320 feet at the Race (see below about the Race).  The past several years we have cruised along the north shore of Long Island.  There are some great anchorages there, but this year we took a detour and headed northeast to Black Rock, Connecticut.  There we met up with long time friends for dinner.  It’s always so good to see familiar faces along the way. 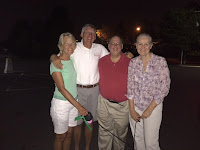 From there we were Block Island bound.  This is another one of our favorite spots to stop.  And again, we were able to reconnect with some marine industry friends that we have known for years.  Along the way, we passed the Little Gull Lighthouse off of Fisher’s Island, New York.  The fog horn was blowing.  (I wish you could hear it!  I just love that sound!) 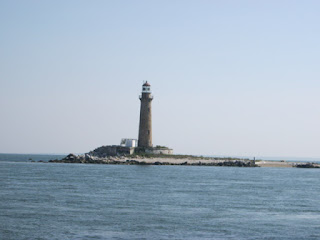 Then we passed through a part of the Sound referred to as “the Race”.  The Race is located between Fisher’s Island and Little Gull Island.  It’s about 3-1/2 miles wide and serves as the main entrance into Long Island Sound from the Atlantic on the eastern end of Long Island. Depths in the Race range from 320 feet to less than 50 feet.  These dramatic changes, along with the massive water exchange in and out of the Sound create a large rip line.  And, in turn, this significantly affects cruising speed, either negatively or positively depending on tides.  But we timed it perfectly, naturally, because that’s the way this captain planned it.  He did his homework.  We left at just the right time from Black Rock, and we got a huge boost going through the Race.  We increased our speed by almost 50%.

Next we are headed to Cuttyhunk Island. We’ll be back to you soon!