Well, Martha’s Vineyard proved to be a great “port-in-the-storm,” 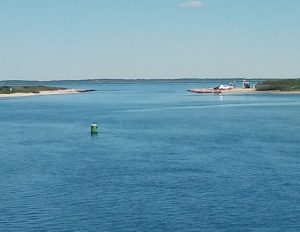 or rather an “anchor during the wind!”   Lake Tashmoo is surrounded by big trees and banks, and it’s a very protected spot to drop the anchor.  In fact we loved it so much we stayed 5 days!  After moving up the coast fairly quickly, we enjoyed the opportunity to relax, do some boat projects, take walks, and read (something we never seem to have 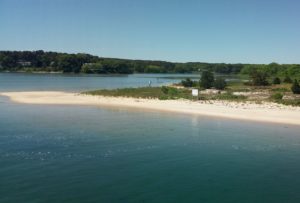 time to do).  John likes espionage and “whodunnit” books. I prefer biographies and fiction-based-on-fact books.  In fact, I read “The Life and Times of the Thunderbolt Kid” by Bill Bryson.  It’s an autobiographical book about a guy who grows up in the 50s and 60s, the peculiarities of his family and his adventures, etc. etc.  I laughed out loud so many times; and when I would try to read a section of it to John I could hardly get the words out I was laughing so hard!

It’s about a 25-minute walk to the nearest town, Vineyard Haven. 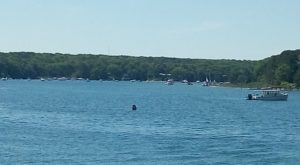 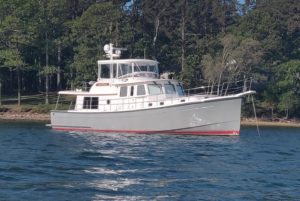 Our walk there was pleasant but there wasn’t a lot to do as not much was fully open.  Another day we walked to John’s Fish Market for another clam-chowder taste test in our never ending quest to find the best!  Our opinion:  Lobster House in Cape May is still number 1.

We said “adieu, Lake Tashmoo”  this morning and had a delightful ride 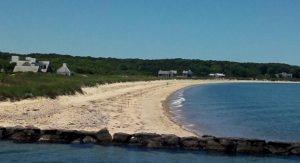 According to “Mr. Wickylickypedia,” Edgartown was one of the primary ports for the whaling industry during the 1800s.  Ships from all over the world would dock in its sheltered bay and captains would build grand 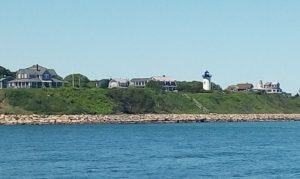 mansions for their families with ornate top floor rooms called widow’s walks, which overlooked the harbor. A myth developed that wives would watch for months from these tiny rooms, hoping to see the sails of ships that would bring their husbands home from the sea. There is little or no evidence that widow’s walks 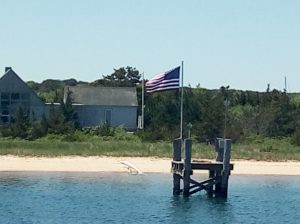 were intended or regularly used for this purpose. They were frequently built around the chimney of the residence, thus creating an easy access route to the structure, allowing the residents of the home to pour sand down burning chimneys in the event of a chimney fire in the hopes of preventing the house from burning down. As more economical alternatives became available the whaling industry began to decline. By the beginning of the 20th century, its influence on the tiny town which had made its fortunes through the industry, was ended. Today the town is more known for tourism, as well as the site of Chappaquiddick, where Ted Kennedy’s fatal automobile accident took place in 1969.”  The locals refer to Chappaquiddick as “Chappy”. 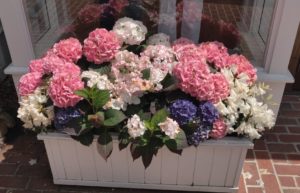 This patriotic sailboat sailed by our bow this 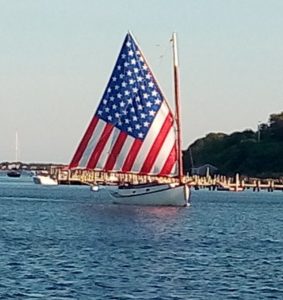 evening!  I couldn’t resist taking a picture.  As you have probably figured out, I am a big fan of the American flag!

And this was the view from our stern.  Not a bad place for a spaghetti dinner, don’t you agree? 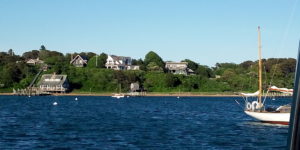 The next week or so we will be in Nantucket spending time with family and friends.  Stay tuned for more cruise-news from Daystar!