About our days on the water, moving the boat, some of our friends and family ask, “what do you do?”  For sure, it’s not like being at home!

Here’s how today went, as we ran the boat from Kittery Point to Saco, a 34 mile trip:

The sun rises early here in Maine, really early……..5:03 am today, to be exact (which means it starts getting light about 4:30!)  I got out of bed about 5:30’ish.  Fed the dogs.  Made a cup of coffee; and then spent an hour or so reading, pondering, praying.  The dogs went back to sleep.

One of the things I miss most about home is the back door so I can just let the dogs out in the backyard, unattended, to do their thing! But alas, they are accustomed to our boat ways, which means 3 outings each day when we are not at a dock……morning, after lunch, after dinner.  (When we are tied up at a dock, it’s an easy hop on/off at any time.)  Our morning run ashore is about 7 or 7:30.  Sometimes I take them alone, sometimes John does, sometimes we go together.  Upon return, breakfast for the humans is usually a piece of toast or half a bagel…..and a 2nd cup of coffee!

This morning we dropped the mooring line around 8:30.  But times of departure can differ depending on how far we’re going, currents, and water conditions.  Then we settle in for the ride, often accompanied by John’s eclectic playlist of music….including Johnny Cash, Suzy Boggus, Queen, 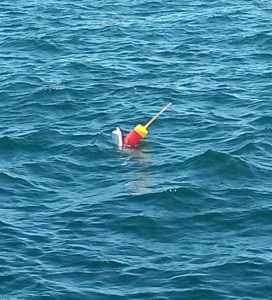 On this Maine trip in particular, we are especially appreciative of our double Stidd chair on the bridge so that we can sit side by side and look out for lobster trap floats.  For the most part they are colorful and easy to see (which is more than I can say for the crab traps in the Chesapeake!).  It’s just that there are a lot of them! 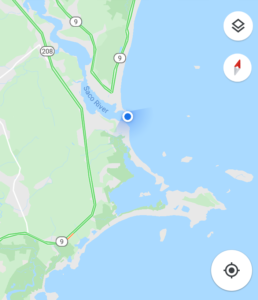 do for dinner!  And since this area is all new to us, we spend a lot of time researching our destination, what we will find, what it offers, where to take get the dogs ashore. This morning I had a one hour “Snapchat” training session with my nephew.  In reality I don’t know how much I’ll ever use it, but he and I had a lot of fun and laughs!   I also had a text exchange with one of our former owners who summers in the area and has good local knowledge.  Then it was time to make lunch!

Around 12:30 we pulled into Wood Island Harbor which leads to the Saco River and viewed this classic Maine lighthouse, one of many we will see along the way.  We pondered our options……mooring or anchor?  Moorings are more prevalent in the northeast.  They allow for an increased density of boats, particularly in areas 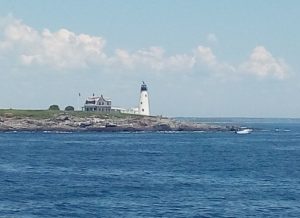 where tides are high.  Here in Maine the tides are 7-8 ft versus Florida where the tides are 2-4 ft.  Because of the method in which moorings are secured they use a much shorter scope than when anchoring.  For instance, our swing here on a mooring is 20-25 ft.  If we were on at anchor, our swing would be 200 ft.  Therefore 2-4 times as many boats could be  accommodated in a particular area. 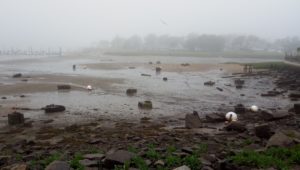 We cruised into Camp Ellis (altho it’s not a camp, but more like a seaside hamlet) on the Saco River where there were supposed to be 2 free moorings. Both were occupied, but…….then I spotted a third…. and it was available!  John made a quick u-turn, I grabbed the line, secured it, and we were set!  Lunch completed, we lowered the dinghy and took the dogs ashore for a walk. It was an unbelieveable 85 degrees, so the walk was short.  But it allowed us to spot a good take-out dinner spot for the next night!

Up on the next blog……fog!  But these pictures give 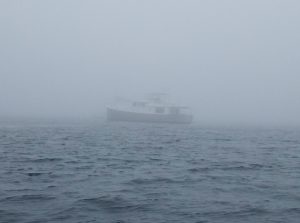 you an idea.  One also shows the severity of the tides!  See those mooring balls sitting on land?!