We left the Saco River mooring on Monday morning in the fog and continued northeast in the fog around Cape Elizabeth into Casco Bay in the fog.  It’s a very weird experience, cruising in the fog, particularly when it’s all new territory.  We could not see farther than 200 feet, and for the most part were totally reliant 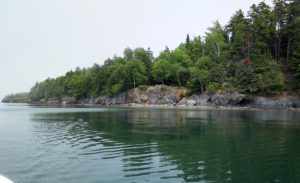 on our radar.  Fortunately there was very little boat traffic and we were able to keep tabs on the lobster floats.  Our destination, Jewell Island, was approaching and we were struggling to see even the outline of trees on the islands surrounding us.  But the sky was very bright.  It seemed like the sun 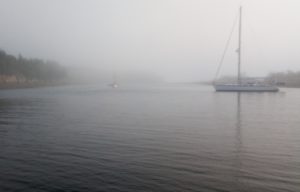 was so close, yet so far.  At one point, I picked up my binoculars, looking for buoys and identification points.  As I took them off my eyes, suddenly the sun appeared and the area was totally clear!  It was the wierdest experience!  We were able to easily enter the anchorage and get set before the fog returned.  And return it did!  The next 2 days were thick fog, altho we did have minutes of clarity.

Casco Bay covers 229 square miles, has some 785 islands, and is home to 7 lighthouses.  Many of the islands are managed by various land trusts which are part of the Maine Land Trust Network.  In fact, Maine has the lowest percentage of public land among all the states in New England.  On the islands we have been on so 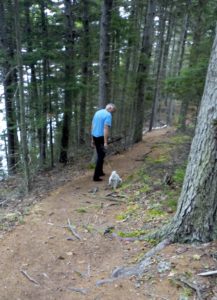 far, there are trail markers and leftover camp fires; but I have not seen one piece of trash, not even a cigarette butt!  Visitors appear to be very respectful of them, and of each other.

Jewell Island was no exception.  It offered several different trails which we enjoyed, despite the 2 dreary days there.  Did I mention it was foggy?!  It was relentless. 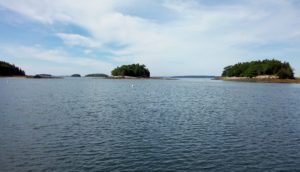 Wednesday morning, after our 2nd night there, we departed – once again in the fog – for Lower Goose Island.  Upper Goose Island is to its north, 2 islands – The Goslings – are to its south.  There is a mooring field here, so we helped ourselves, as borrowing a mooring ball is common practice here in Maine.  (It was the easiest, most effortless pick-up I’ve ever done!)  We took the dogs ashore to one of The Goslings (pictured) 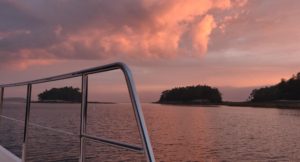 and then settled in for the evening.  The air cleared and we had one of the prettiest skies of the trip so far.  Truly, it was a sign of good things to come.  As you know, “red sky at night, [cruiser’s] delight!”

When we’re at an anchorage or a mooring, many times there is no dock in which to land the dinghy when we go ashore.  That has been the case the past few days.  Instead we land at a beach, which means we hop out of the dinghy in the water and carry the dogs a few yards to the beach, and then reverse the process when we’re done.  The water 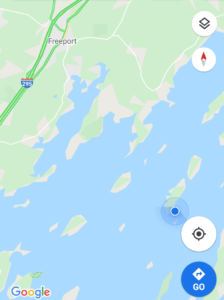 looks cold, but it’s really not that bad!  I’m so appreciative that, when we return to the boat, we can spray off our feet with warm water from the transom shower!

In fact, there are so many things I’m appreciative of on the Krogen Express!  To be honest, I’ve never been a camper.  That was not my parent’s idea of a vacation; nor is it mine.  I like a nice bathroom (aka head), a roomy kitchen (aka galley), a warm pilothouse or enclosed bridge when underway, a tv, a roomy bed, lots of places to put things, big windows that open on a breezy 70 degree day.  The list goes on!

At the end of the week we are going to a marina in Freeport.  That means a trip to the grocery store, and maybe even to LL Bean’s flagship store!  That’ll be a big outing for us! LOL!  A retail sighting for the first time in almost two weeks!