When I left off, we had just been to “The Basin” anchorage.  From there we went to “Snow Island”, about 12 miles away.  These islands are very beautiful and thick with pine trees; but they are not very “user friendly” for taking dogs ashore.  Occasionally we’ve had a pebbly beach to pull the dinghy on to; but for the most part we pull up on rough shorelines with rock, seaweed and some muck!  And of course the tide, whether high or low, changes the landscape of the “landing zone”.  It goes like this:  we stop in 1-2 feet of water.  Dogs leashed, I carry one – through the water – to shore, put her down, walk back to get the other one (and then reverse the process when we leave).  John places the anchor, being mindful of the constantly changing water level, ie. we don’t want the tide to go out and 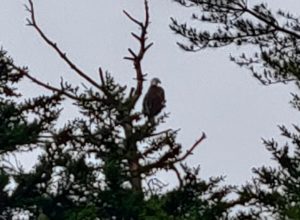 strand the dinghy on the shoreline, nor do we want the tide to come in so that the dinghy is floating in 4 or 5 ft of water.

One evening, as we approached a little island for dog-walking, we looked up and saw an eagle sitting in a dead tree!  And then he flew right over us! PICTURE  It was very cool.  Unfortunately we weren’t fast enough to get a picture of the fly-over!  We’ve also seen loons (and heard their distinctive call), osprey, and seals (who disappear as quickly as they appear!). 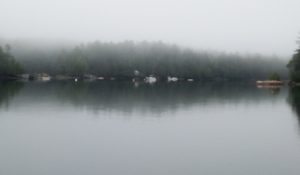 The fog continues to baffle me….how it suddenly appears in the middle of the day, why it stays even when the sun is out, why it doesn’t burn off more quickly!  But it comes with the territory, and it’s just 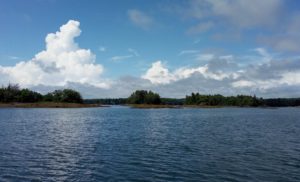 something Mainers are used to.  This is a pretty typical morning view (especially last week when it was very cloudy and a bit rainy ).   But then here’s a different view from the same anchorage when the sun finally came out!  It’s beautiful, isn’t it?  It’s something I really appreciate up here, and probably take for granted at home in Florida. 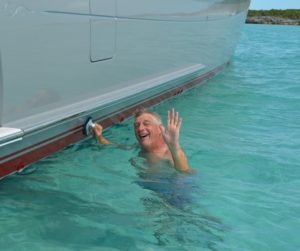 Before we left Snow Island (when the sun had finally appeared!) John donned his wetsuit and did some waterline clean up.  The water was chilly, and took some getting used to, but it was good to get 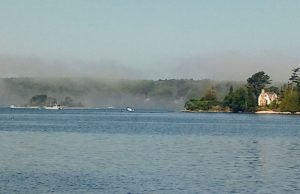 that job done.  This is a picture of John doing the same thing last year in the Bahamas; except he was standing in 5 feet of water!!  After lunch we pulled up the anchor, and off we went.  This was our view as we exited.  See what I mean about the fog?  This was at noon!  It’s almost mystical! 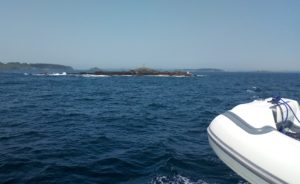 After 2 nights at Snow we departed for Harpswell’s Dolphin Marina.  We passed a lot of these rock islands which fortunately are on the chart.   These pictures do not nearly portray the potential threat these things pose!  They are quite imposing and we give them a very wide berth! 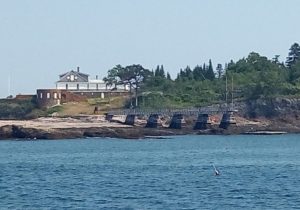 Park, formerly the home of Admiral Robert E. Peary, the Arctic and North Pole explorer.  Although he died in 1920, his family continued to live in the home until they donated it to the state in 1967.  It is now a National Historic Landmark. 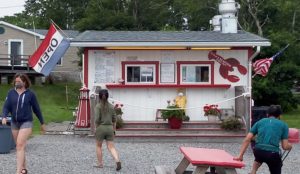 Just outside the marina grounds is Erica’s…..a fabulous and pretty typical little fish shack with picnic tables and the most fabulous lobster rolls! 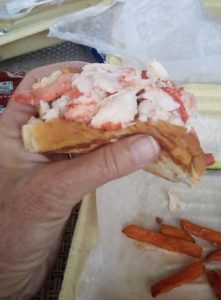 I imbibed two days in a row!

After a night on the dock and two at one of their moorings, we then set off for Boothbay Harbor area.