We got spoiled at Dolphin Marina in Harpswell!  They delivered huge 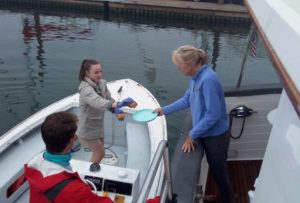 blueberry muffins and coffee to each visiting boat every morning!  They were absolutely delicious!

Love the little (and big!) perks the Krogen Express offers, like the stackable washer/dryer unit (that I am really loving today while we’re at the dock in 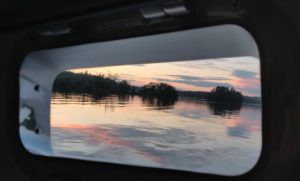 Boothbay Harbor) and a pretty view from the shower (which John enjoyed).

But first I’ll update you on our activities between the muffins and the laundry! 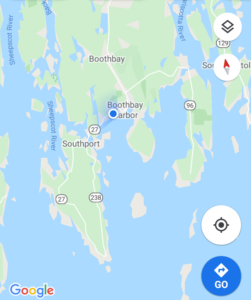 within a 10 mile area east of Harpswell and west of Boothbay .

Our first stop was Indiantown Preserve.  This is one of the islands included in the Boothbay Harbor Land Trust.  From our research we knew that there was supposed to be a “guest” mooring ball, but as we approached we spotted two.  I grabbed one and easily picked it up.  A while later a sailboat came in and picked up the other. 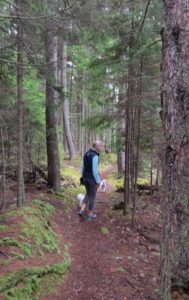 The next morning we got a friendly visit from “Bob” who, it turns out, owns both balls.  Normally his personal boat occupies one of the balls but, this summer being what it is, he didn’t put his boat in the water.  He was a really friendly guy and we had a very enjoyable conversation with him.

The island has walking trails through lush forests of pine trees.  It was almost magical it was so beautiful!  And….there was a small dinghy dock with ramp provided so which made it super easy to go ashore with the dogs. We all loved the 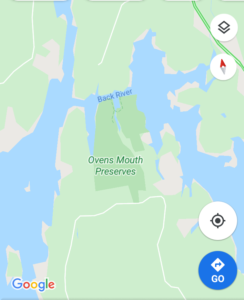 opportunity to walk the trail and get some exercise!

After two nights there, John set his sights on an area called Oven’s Mouth, which again is part of the Boothbay Harbor Land Trust.  He was intrigued by the challenge of the entry into the anchorage and the idea that it was off the “beaten path”.  When we arrived we spotted a cell tower

nearby.  Nothing could be better for this captain than a cell tower AND seclusion at the same time!   We launched the dinghy and made a trip ashore for a walk through the preserve, landing at a nearby shelf of rock, easily hopping ashore.  But…. that was at high tide.  Five hours later, at low tide, was another story.  The tides are so severe here that our once accessible landing zone was now off in the distance and we were faced 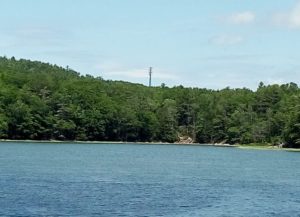 with muck and rock completely covered in seaweed.  I set Zoey down on what I thought was rock but turned out to be muck.  Ugh.  She looked like she had little gray booties on!  I couldn’t help but think of my friend who has a gorgeously groomed Sheltie and how aghast she would be at the thought of having to take her dog ashore through this stuff!  It was a perilous journey to land on the seaweed and back again, but we made it.  And then of course we had to do the same thing again the next morning, 12 hours later.  It’s interesting to watch the process of them pulling up the traps, etc.  Kind of 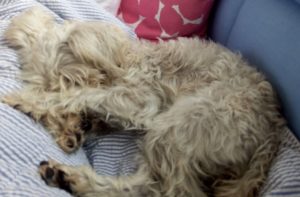 like our own up-close-and-personal “Deadliest Catch”, without the 30 foot waves!

Here are a couple of good photos we captured.  It’s almost like she’s saying “I’m not really into these 4:30 am sunrises!”  And Daystar in the fog!  The fog is 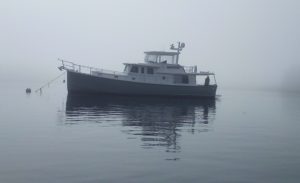 really something else.  It’s like your glasses are dirty or you have something in your eye!  It seems relentless, although locals tell us that this much fog is unusual for mid-July.  It’s noon as I write this and my visibility is about half a mile.

We said adieu to Oven’s Mouth and went about 7 miles to Robin Hood Marina and picked up a mooring (so I could have access to a dock when we went ashore!).  This was a pretty spot, but the stay here was sort of a non-event.  We just wanted to try another area, and that we did. 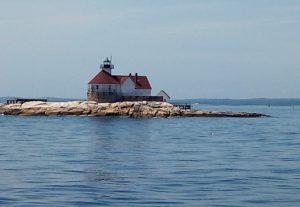 Next stop was Boothbay Harbor Yacht Club.  On the way in we passed this very cool lighthouse called the Cuckholds Lighthouse.  Construction of the lighthouse began in 1892.  In 2004, deemed excess to the United States Coast Guard, the lighthouse was rescued from complete decay and/or destruction by a small group of local citizens.  Over the next 10 years the group raised funds and local businesses donated design expertise, building materials, and other resources to restore the light tower, rebuild the keeper’s house and the boathouse. Following this the lighthouse became an inn with two guest rooms.  It closed in July of last year when the innkeepers, a husband and wife team, retired.

The Boothbay Harbor Yacht Club has moorings available to 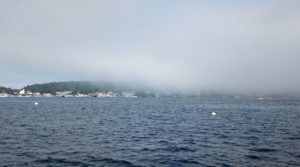 the public and they provide launch service which was a nice perk!  The Yacht Club is across from the harbor, so we could look over and anticipate our visit into town in the following days.  When we are out in these isolated anchorages with almost no interaction with other people and certainly no retail, coming to a little town like Boothbay Harbor Maine (full-time population of 2,200) is like going in to the big city!  After the night there, we went into Hodgdon Marina for the weekend.