As a lover of boating and an avid recycler I find it frustrating that very few marinas provide any recycling bins.  And I’m talking up and down the east coast of the United States, not just in Maine.  But I find it particularly ironic and disheartening that, as we are surrounded by beauty and nature, our trash bags are filled with plastic, cans, and glass that will end up in a landfill.  At home, we have trash pick up twice each week. 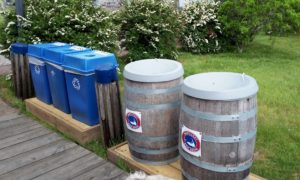 My neighbors place at least one, if not two, bins out each time filled with trash.  They laugh at me because I put out just a half-filled “tall kitchen” sized bag.  But on Mondays when the recycling bins go out, ours is over-flowing!  So it absolutely breaks my heart to fill my trash bag with recyclables and put it in the marina dumpster.  While Nantucket – being a small island – is especially conscious of their waste management, this is how they do it there.   Bins like that are on almost every corner, especially near the marina.  Sigh.  How I wish every town and marina did it like that!  (I know, some of you may be saying, “recycling is just a myth”! But that’s discussion for another day!)

Here are some favored pictures that I’ve been meaning to share with you. 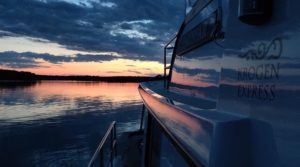 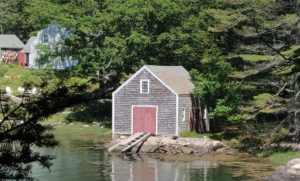 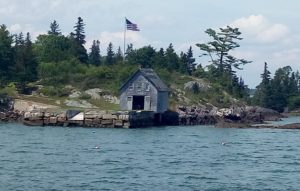 John loves a quiet anchorage, and we found this perfect spot a couple of nights ago.

Calderwood Island in North Haven near Vinalhaven.  As we approached it, I 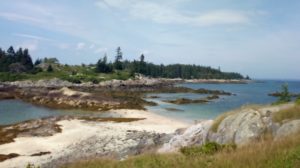 spotted a swimming hole that looked very inviting.  Once we were settled and the dinghy was down, we drove back to it to get a closer look.  There was actually blue water and white sand!  ALMOST like the like Bahamas, but with rocks and seaweed!  On the backside of the hill was our anchorage; and in between was a wonderful grassy path.  Now this area reminded me of Scotland with it’s rolling hillsides and highlands.  This was the view from the hill. 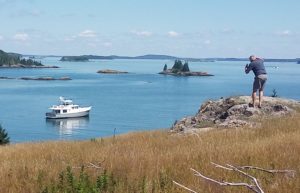 Vinalhaven is an active lobster fishing community and has a colony of summer homes. It was incorporated as a town in 1789, named after John Vinal who was the agent who petitioned the Maine General Court to incorporate the new township.  He wasn’t even a town resident, but the name stuck! High quality granite was discovered in 1826 and Vinalhaven became one of Maine’s largest quarrying centers for the next century.  Vinalhaven lobstermen were the first in the nation to unionize. They began to organize in the winter of 2012-2013 after frustration with low lobster prices being paid to them and disagreements with the Maine Lobstermen’s Associations leadership.

We left the solitary spot of Calderwood and moved to what is hailed as a very desirable and popular anchorage, Seal Bay.  It was also recommended by one of our owners who cruises up here often.  Popular it was!  There were several boats when we arrived, so we picked a more secluded spot away from the others.  All was good until a guy pulled in and set his anchor right next to us, closer than is normal.  As you can imagine, John 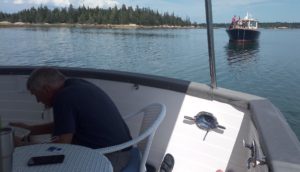 was not a happy yachter!  After a couple of hours the guy dinghy’ed over, apologized for being so close, and told us he’d move a little further away.  It was very kind of him.  By evening, there were 17 boats in the anchorage!  One guy ceremoniously shot off a “gun” when the sun set (although it did make us jump a few feet!).  As for the dogs, at low tide was a great spit of sandy beach connected by boulders where they could run and climb and explore.  They were happy pups indeed.  And many thanks to T-Mobile for arranging to have a cell tower right near the anchorage!  Sweet!

It’s always fun to take a mid-afternoon dinghy ride to see the surrounding islands which is exactly what we did the following day.  This time brought a bonus!  At one point I looked out on the water and there was the face of a seal staring right up at us!  He was probably 20 feet away or so.  But not even 10 seconds later, down he went.  It was a fleeting but thrilling sight!

Following Seal Bay we made our way to Long Cove on the southwestern part of Vinalhaven where a new acquaintance (from Boothbay) had offered his mooring.  We’re always happy to pick up a mooring and not have to deal with the anchor, so we gratefully accepted!  It was a perfect spot (well, except for the almost complete lack of cell service) and we made some more new friends there who gave us tips and suggestions for future stops.  That’s always appreciated.

On our mid-afternoon dinghy excursion there we saw an eagle’s nest!!  Mama was proudly standing guard.  The nest was huge!  We were too far away for a decent phone picture, unfortunately.  But eagle’s nests are typically 3-5 ft deep, 5-9 ft in diameter and mostly composed of large sticks.  Eagles mate for life and they typically return to the same nest year after year to lay their eggs.  The average clutch (group of eggs) is 1-3.

Well, big news!  I spoke too soon about marinas and recycling!  We just arrived at the 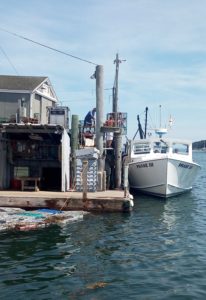 Tenants Harbor Boat Yard for a 2 day stay.  And……..they have recycling!  I’m thrilled!  Plus, a lobster wharf is just off our stern.  The boats are coming in, one after another, dropping off their catch to the wholesaler.  I’m headed over there in a minute to buy a couple for our dinner!

This is a good little marina, not fancy, nothing much to do, nowhere to shop or visit although there is one B&B about 5 minutes away that serves breakfast and lunch.  We did not imbibe because we were too busy taking advantage of the fantastic internet!  Some of these marinas say they have wifi but when it comes right down to it, you roam the property to find a good connection; and even then it feels like “dial-up” all over again!   Not here!  In addition to all our internet activities, we cleaned the dinghy, scrubbed the aft deck, washed clothes, and took long walks with the dogs.  It’s always so satisfying when we leave the dock for the next destination knowing that we’ve been productive.

Now on to Rockland for a day or two to get groceries and see some town!