Our one night stay in Rockland was exactly as we planned……productive.  But it was hot!  Not typical for Maine summers, the daytime temperature reached 85.  We dropped the anchor in Rockland Harbor around 1, and dinghy’d to a dock that put us just a 15 minute walk from a grocery store.  Once again I had to carefully plan to buy only what we could fit in our backpacks, didn’t weigh a lot and could stand the warm ride back to the boat.  That would not include butter, jarred pickles, or ice cream (altho John insisted that he needed salsa, so he carried that!)!  Refrigerated and heavier items will go on the list for next time.  Groceries dropped off and put away we grabbed the dogs and went in to town.  Rockland has a quaint main street with cute shops.  John and the girls sat on a bench in the shade, while I window shopped.  On the way back to the dinghy dock I spotted a Dairy Queen!  You can probably guess where we went during our evening outing to land!  Yup!!  The next morning John was able to get something he needed 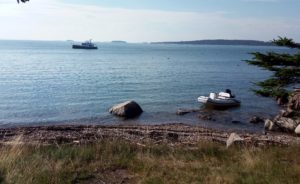 at a local marine store there which was very nearby.  Missions accomplished, we pulled up the anchor around 11 and headed out to Isle au Haut.

This island (pronounced I La Ho) is one of a bazillion islands in Maine.  (Well, actually there are about 4600!)  Arrival here placed us in the thick of Penobscot Bay.  It is as beautiful as they said it would be! The bonus is 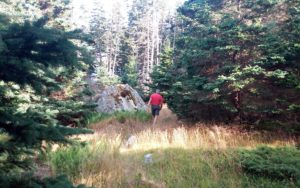 that the weather has been absolutely gorgeous……. sunny, puffy clouds, clear skies…..perfect, I’d say!  We were the only ones at this particular anchorage, just the way John likes it!  (He could live in a cabin for the rest of his life, never see anyone, and be perfectly happy!  I, on the other 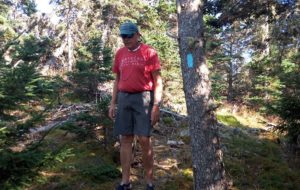 hand, am more of a social animal.  He has a good buddy at home who’s just like he is, so when we all go to parties, he and Jeff sit in a corner and talk boats and other guy stuff, while Jeff’s wife and I work the crowd!)  We walked a lovely trail there to the other side of the island.   They put paint marks on the trees, so walkers can find their way on the trails.

Similar to our time in the Bahamas, here in Maine we are island hopping, with anywhere from 10-25 miles between stops.  And as in the Bahamas, we enjoy cruising at our displacement speed and sipping the fuel.  Many of the islands of Penobscot, as with most of the Maine islands, are covered in pine trees.  Some 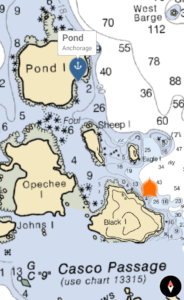 just have low lying bushes.  But they are all surrounded by rock ledges and there are a lot of them!  Often, too, there are spits of sandy beaches dotted along them.  We are especially appreciative of those, as they provide a great spot to get ashore with the dogs.

I mentioned MITA (Maine Island Trail Association) in an earlier posting.  This app has been invaluable to us.  It has charts and then descriptions of each spot.  The descriptions include a summary of the island’s topography, and information about camping, pets, fires, anchoring, trails, getting ashore.

Waking up is really easy in Maine (sometimes that’s a good thing, sometimes not!)!!  Either the sun or the lobster boats are our alarm clock.  Oftentimes it’s both!  The sunrise today was at 5, so there’s light around 4:30.  The lobster guys are out and about shortly thereafter.  Since traps are always around us, the boats come pretty close.  For the most part their boats are equipped with dry-stack exhaust with no mufflers, so it’s easy to hear them coming and going, even if they’re more than a mile away! Sometimes the crew is 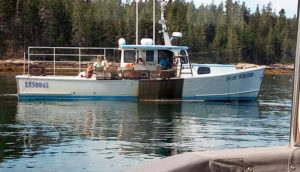 particularly chatty amongst themselves, with a bit of “colorful” language thrown in!  On this particular boat the 1st mate was the captain’s adorable son who looked to be 7 or 8 years old.   I watched them for a few minutes, 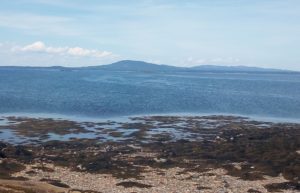 and that kid was really conscientious!  No doubt his dad is grooming him to run the boat himself someday.

A boater’s life is to get up with the sun, go to bed when it’s dark.  That’s (almost!) how it works for us too!   After dinner we take a walk on the beach, watch a little tv, and head off to bed.  Gotta be rested for the next day’s adventure!  Southwest Harbor, Northeast Harbor, Acadia National Park await us!