Cruising around Mt. Desert and Acadia areas has provided us with the most incredible views we have ever seen while boating!  If you are a boater reading this, all we have to say is…….don’t miss it!  As I snapped picture after picture I thought that my next posting might just be composed entirely of photos.  But the history of this place is so interesting, I definitely wanted to include at least some text describing it (if that’s even possible!)

As you can imagine, 2-3 million years ago glaciers carved out the coastlines, lakes, cliffs and hills of Maine.  Climatic 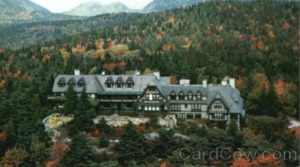 changes eventually halted the glaciers’ progress around 18,000 years ago.  As the ice sheet receded, the ocean advanced, flooding the valleys and cutting the island of Mt. Desert off from the mainland.  It is the 6th largest island off the east coast of the United States.  It is 108 square miles. The area has a rich history of Indian tribes, French and Italian explorers Verrazano and Champlain, 19th century artists Thomas Cole and Frederic Church, and America’s most 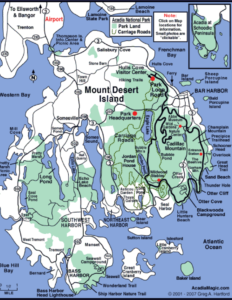 socially prominent families – the Rockefellers, Morgans, Fords (whose house is now owned by Martha Stewart), Vanderbilts, and Pulitzers. This latter group built magnificant summer “cottages”, changing the rustic character of the island; but they also helped preserve the area by donating land to form Acadia National Park.  John Rockefeller’s house was built in 1914 and demolished in 1962.

The individual who led this preservation was a man names George Dorr from Boston, whose family made it’s fortune in textiles.  He would spend 43 years of his life working to protect and preserve Acadia for public use.  John Rockefeller, Jr., the oil baron and philanthropist, donated more than 10,000 acres of parkland.  In 1913, fearing that 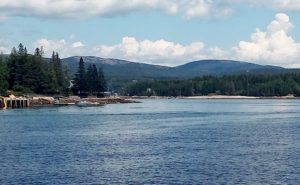 the park would be overrun by the ever increasing popularity of the automobile, Rockefeller financed the construction – over a period of 25 years – 45 miles of stone “carriage” roads and bridges that today are enjoyed by hikers, walkers, bicyclists, and  cross-country skiers.  The area was designated as a park in 1919, the first national park east of the Mississippi.  It now encompasses about 49,000 acres in three main areas…..Mt. Desert Island, part of the Schoodic Peninsula northeast of the mainland, and some smaller adjacent islands. 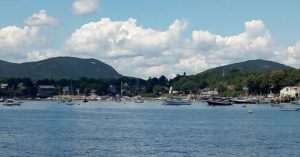 Our first stop at Mt. Desert was Southwest Harbor, home of Hinckley Yachts.  We rented a mooring there (one of 5 available) for a couple of nights, providing us with a gorgeous view of Acadia.  Here is a picture looking into the harbor.  But we had absolutely no cell coverage or wifi!  Eeek, that is so frustrating!  On a walk in to the village we discovered that the information/visitors center had great wifi, so we helped ourselves and downloaded like crazy!  The Coast Guard has a station right there at the mooring field, so we 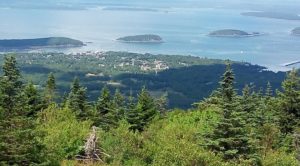 had the honor of hearing “Colors” played each day at 8 am and 8 pm.

Some industry friends who summer in Southwest Harbor offered to drive us around to see the park and surrounding areas, and of course we gladly accepted!  The highest mountain is Cadillac Mountain at 1,530 ft.  From there we could look eastward and down on the busy town of Bar Harbor (which we only drove

through).  This map shows you the park areas.  Southwest Harbor is in the lower left, Bar Harbor the upper right, and Cadillac Mountain in the middle right of the map.  We were so thankful for our friends’ hospitality.  Otherwise we would have missed all of the land sites!  Here are a couple (I HAD to limit it!) of pictures of what we saw. 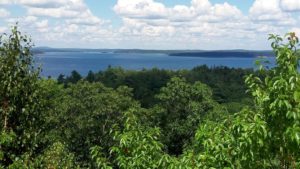 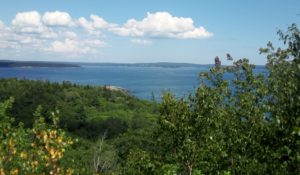 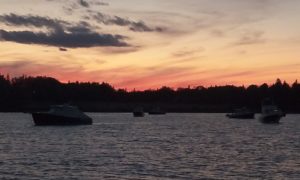 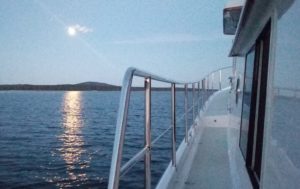 After leaving Southwest Harbor we motored east about 15 miles to Winter Harbor.  There is a modest yacht club there that rents mooring balls.  It was a rather inconsequential stop, but it was nice to see another spot, and it had a dock (always a bonus!) for going ashore.  We had a beautiful sunset and almost full moon.   But our good weather streak broke, however, because the next morning we awoke to super thick fog!  Maine fog does not just “burn off” with the rising/warming sun, as I’m used to.  It takes several hours, at least until 11 or 11:30 am for it to partially dissipate.  This is the view we had of the coastline as we 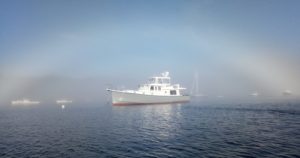 cruised west.  We were about half a mile from the shoreline and if you look really, really hard you can just barely see a green  “can” in the middle left of the picture! The fog came and went and finally totally disappeared a little before noon.  Phew!  It’s tough running through the fog; and it’s always nice to be able to see the lobster traps before you are almost on top of them! 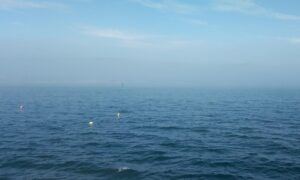 We tried to get in to popular Northeast Harbor which has mooring balls or dockage only; but we were unlucky.  Desirable it is!  The moorings there are first come, first served and are almost twice as expensive as those in Southwest.  There were no moorings available and the dock space was booked through August! So we went to Plan B………anchoring in Somes Sound.  The Somes Sound runs deep into Mount Desert Island.  It is often described as the only fjord on the East Coast.  However, in truth, it does not have the extreme vertical height and sea bed componentry 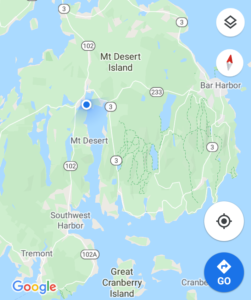 associated with Norwegian fjords.  It is in actuality a “fjard” –  “a glacial depression or valley that has much lower relief than a fjord”.  Still it felt a little bit like we were cruising in 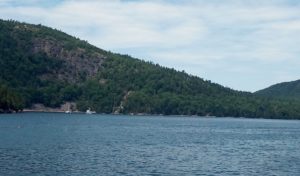 Switzerland, not Maine!  The little white dots in the picture are boats and give you some perspective on the height of the hills.

We made our way to the head of the Sound which turned out to be a splendid set up!  1) we were protected from some strong southeast and then southwest winds the next day, 2) there was a public dinghy dock, and 3) there was fantastic cell service.  The bonus was the lovely view.  Because of the winds, we decided to stay two nights.  Tomorrow – when the winds die down – we will see if we can anchor near Northeast Harbor and run into the cute village/town for a couple of hours. 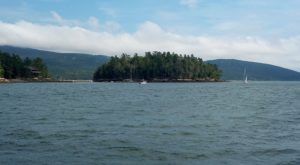