We pulled up the anchor from our Somes Sound “home” and we determined that the almost windless morning, being what 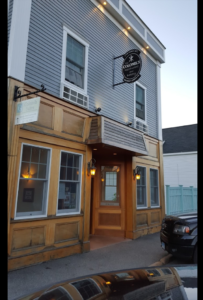 it was, would allow us to safely anchor outside of Northeast Harbor.  That turned out to be a seamless endeavor.  We dinghy’d into the town and had a nice walk with the dogs.  The town itself is pretty small, but it has an absolutely fantastic donut shop!  As one review said, “You haven’t had donuts until you’ve been to Colonels!”  We treated ourselves to a couple of take-out donuts and headed back to Daystar.

On our minds was the remains of Hurricane Isaias, now a strong tropical storm, headed in our direction.  Fortunately, over the past few days, the track had moved further inland, meaning we would not be in the direct path; but would still experience significant winds.  After 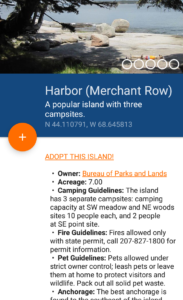 researching the options for a protected anchorage, we selected one called “Inner Harbor” which would provide good shelter (altho it was a terrible spot for taking the dogs ashore).  We set the anchor and, in anticipation of the high winds, let out more rode than usual in order to reduce the anchor line scope (ensuring better anchor holding).  The winds kicked up around 9 pm and peaked about 1 am.  John slept in the salon so he could keep an eye on things.  When the sun came up at 4:30 am things were pretty calm. As we live in Florida and are always boating in the late summer and fall, when these storms occur, Mr. Weatherman provides us with the “opportunity” (haha!) to first monitor the safety of our house in Florida, and then tend the boat in the north!  For us it’s a double whammy!

The storm behind us, we headed to a new area, “Merchant Island”…..a really pretty spot that had a dock we used to get ashore!  On this island is a campground for kids with a very nice one-cabin facility for them.  It was a bonus that we could use the dock and the girls enjoyed running in the nearby fields.  On the other side of the harbor was a beachy/rock area and they had a great time walking on the rocks and the nearby trail.

As we go from one spot to another, the lobster floats can be so thick that we sometimes have to find our way 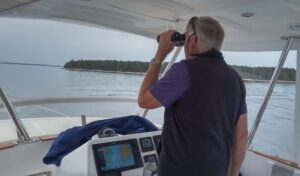 through them using binoculars!  It’s especially difficult if there is any sort of water movement or if the morning sun is shining on them. Up here in Penobscot Bay we have found that many of the traps are toggled, meaning that for each trap there are two floats tied to each other.  But the distance between them can be as long as 25 feet, so you have to figure out which floats are 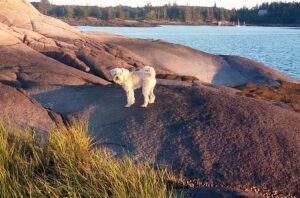 connected and which are safe to drive through…….all before you actually snag a line!  It can be really exhausting!  Best we can figure out, the purpose of the toggle is to keep excess rope off a potentially rough sea bottom and to provide some slack rope in areas with a lot of tide making it easier for the lobstermen to haul the trap.

The next day we returned to a favored anchorage……Seal Bay.  The last time we were there, we had 17  neighbors!  This time only 5.  At low tide there is a long stretch of beach between rock outcroppings.  The dogs just loved running along, looking for crab-shell remnants and other odd things to crunch on (of which we sternly 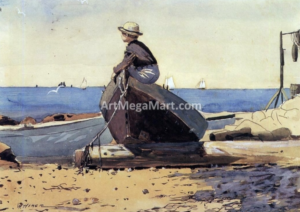 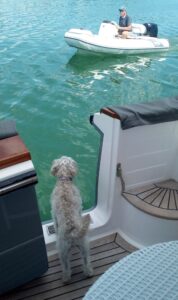 When we arrive at an anchorage John sometimes likes to go out in the dinghy and check the depths in the area.  While he was gone, Zoey sat at the side gate and watched for his return.  It reminded me of one of my very favorite paintings by American artist Winslow Homer, “Waiting for Dad to Return.”  I just love this picture of Zoey waiting for her dad “to return!”  I’ll leave it to your imagination to picture how vigorously her tail was wagging as he approached!

Now we are in Camden for a week!  I – in particular – am enjoying being at a dock, the short 10 minute walk into town and the public library, some fun shopping, and the pretty views off our stern of the harbor and of Camden Hills State Park. 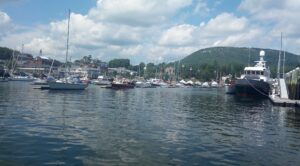 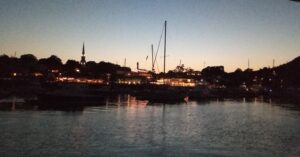